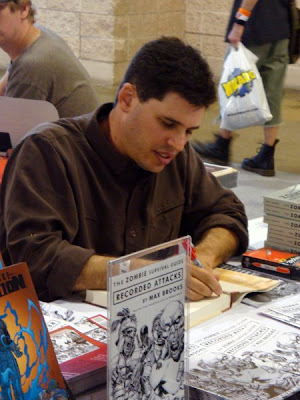 One of the highlights of Wizard World this year was not only meeting World War Z and Zombie Survival Guide author Max Brooks (who was a helluva nice guy, by the way), but also being able to attend all of his panel discussions. He signed my copy of WWZ (he scribbled a compliment to my shaved head, saying it was a good choice, as zombies wouldn't be able to grab me by the hair), and I convinced him to record a quick promo for what is currently my favorite podcast on the planet, Mail Order Zombie. It kicks off the current episode (number 74), which can be found right here. 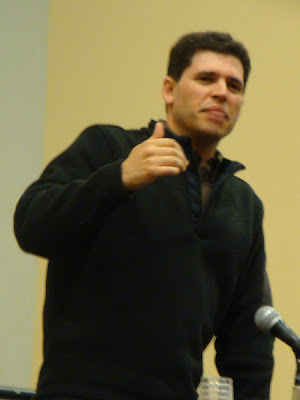 Max was a part of 3 different panels - a Q&A with Avatar Press' William Christensen, focused on Brooks' upcoming Zombie Survival Guide: Recorded Attacks; "Writing The Undead" with Fred Van Lente (writer of Marvel Zombies 3 & 4) and John Russo (co-screenwriter of Night of the Living Dead); and Max's own "What's Your Zombie Plan". Of course, all three events ultimately turned into Q&A sessions about all things zombie, and I ended up hearing some of the same info several times, but they were all highly entertaining. Big fun. 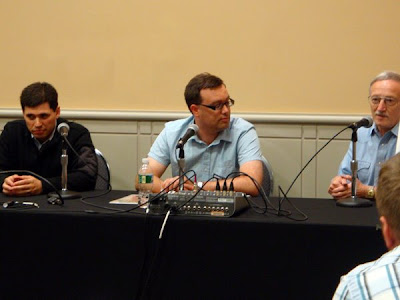 Among other things, he talked about the WWZ movie, and the fact that production was recently delayed. In essence, he told the audience that we, the fans, have more more power over what's going to happen with the film than he does - since they've already paid him for the book, and now they're after our money. So he urged anyone with the interest and drive to do so, to contact the people involved in making the film.

My buddy Dan over at Geekadelphia scored a quick interview with Max, which you can check out here. Toward the end of it, you'll find all the info you need to contact the film folks.
Posted by Scott at 6/28/2009 05:07:00 PM
Email ThisBlogThis!Share to TwitterShare to FacebookShare to Pinterest
Newer Post Older Post Home