20Q7A: An interview with Douglas Hackle 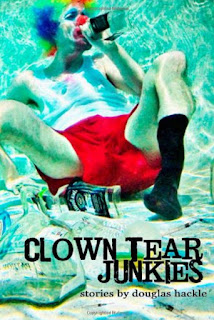 DH: I only have one published book, Clown Tear Junkies (Rooster Republic Press), which is a collection of my bizarro short stories. My latest completed works, though, are a novella tentatively titled The Hottest Gay Man Ever Killed in a Shark Attack and a novelette called The Ballad of TERROR TINY TIM, both of which are unpublished. The main difference between these pieces and my previous work is their length, since nearly everything I wrote before them is either short story length or shorter. However, thematically and stylistically, these longer works were written in the same general spirit of reckless, off-the-rails, batshit insanity that characterize the stories in Clown Tear Junkies.

DH: Probably the creature from John Carpenter's The Thing. It’s ability to assimilate and imitate other organisms, hide itself, and wreak havoc through paranoia always terrified and fascinated me. One of my traditions every winter is to watch a double feature of The Thing and Misery (when it’s snowy and cold out, of course). Annie Wilkes is a great movie monster too.

DH: Hmm. Well, if there were no restrictions on length, I would’ve liked to have been named the following:  I Know You’re About to Kill Me and Bury Me in the Shallow Grave That You Just Forced Me at Gunpoint to Dig Out Here in the Woods (I Now Realize That There’s Nothing I Can Do to Change This), but Please Don’t Escape Hospice Care a Year Later to Return Here on the Anniversary of My Death to Dig Up My Body, Gloat Over It, and Poke It with a Stick!!!

DH: No. Most of the time I find music to be distracting when I write. But I do sometimes listen to music when I take breaks during writing.  Unfortunately, I am experiencing a sort of overall aversion to more or less all music. Consequently, my choices of what I can listen too are extremely limited. Specifically, I can listen to “Clowny Clown Clown” by Crispin Glover, “These Boots Are Made for Walkin’” (Crispin Glover’s version), “Stay the Night” by Chicago, and “Round and Round” by Ratt.  But as of late, my favorite things to listen to are recordings of babies banging on pianos on Youtube. This is my new jam right here: