20Q7A: An interview with Jamie Grefe 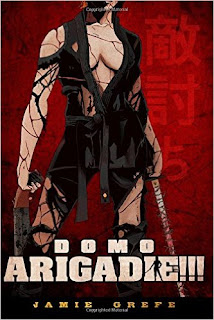 JG: My latest published book is Domo ArigaDIE!!!. It was published in March of this year by Rooster Republic Press, edited masterfully by Arthur Graham, though it took shape two years prior or thereabout, I can't be sure, though I am sure that its genesis lies within a literary obsession that possessed me quite vehemently, an obsession of names, those being the various pseudonyms a certain author (an author now deceased) used to publish a series of novels on desire under, that writer, the one which I am discussing, being Michael Hemmingson, though that doesn't account for the novella's Japanicity, for Hemmingson rarely touches upon all things Japan, while I did and still do in some veiled way, yet had never tried consciously before the writing of this book, and that makes this book different, for beyond my obsession with Hemmingson's work, it was a longing for Japan that crept itself into the work. That said, when those two strands intertwined (Hemmingson and Japan), I had a narrative, a reason to continue writing, a reason to rewrite vengeance, the strand of which I had already expanded in The Mondo Vixen Massacre, but a strand that I will probably continue to keep wiggling and retelling in further works to come like the short novel I recently completed and am editing, in which a post-apocalyptic performance artist struggles to comprehend the death of his wife, but I hope to speak more on that book if it ever becomes publishable, which I am currently willing it to be.

JG: The creature of Anna's desire in Zulawski's Possession, because it perfectly embodies the incomprehensibility of a fragmented relationship, of her husband, Mark's, feverish jealousy and struggle to understand the kind of lover she seeks. This physical manifestation of her desire—the monster—exists as the ultimate unknowable Other, presented to us without explanation, yet firmly rooted as a consequence and cause of their failed marriage. It is horrendous. It is terrifying.

JG: If I listen to music when I write, I do so intentionally, knowing that the music will infiltrate the fiction in some way. For the piece I am currently editing I listened to a heady mixture of Rudolf Eb.er, Tibetan chants, Sunn O))), and Nurse With Wound. The result is a highly condensed meditation that results in characters battling each other in a psychically-oriented liminal space between reality and illusion while their physical bodies mutate into monsters and Wilhelm Reich's mouth becomes a portal of orgone energy. For an earlier work—Mutagon II—I listened only to Sun Araw through the entire process, which resulted in the idea of the mirroring that occurs halfway through the book, a kind of melting dread that pops and snaps, smears and sludges much like the music itself. When I work on screenplays, though, I tend to prefer silence, at least until I get stuck. At that point, I'll listen to John Carpenter. He always saves me from the murkiness of my own thoughts. 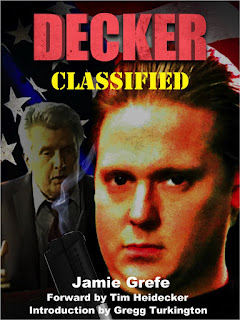 JG: I write on a blue velvet sofa that I bought from someone on Craigslist. The sofa has spanned three states and many posteriors (or so I am told), for it possesses just the right amount of firm springy softness that allows me to sink into it, and be able to rise immediately if need be. If the sofa is being used, I write in a tiny bedroom filled with my daughter's toys—stuffed animals, a plastic kitchenette, a trampoline, little cups, children's books—and the presence of my daughter using her own tiny computer, repeating over and over to herself that she, "has to do some writing." Usually, though, she's just banging on the keys to no real end other than the act itself. I write on an Acer computer, because, when I chose to buy a new computer, I didn't have enough money for a Macbook, but the Acer has grown on me, has allowed me to write and for that, I'm grateful. I also have a damaged black notebook that I received from one of my students. I use it to plan out ideas. I write with a Uni-ball Vision Needle pen. Its precision compensates for all my inadequacies.

JG: I would gladly share a cup or two of black coffee at the Double R Diner with Special Agent Dale Cooper.

JG; I lived outside of the USA for ten years—one year in South Korea, six years in Japan, and three years in China. I would like to visit Connecticut, Maine, Virginia, Guam, and certain parts of Los Angeles, namely Los Feliz, Silverlake, and Burbank, but really, I'll go anywhere for the right kind of work.

JG: Eyes of a Stranger (1981) exceeded my expectations in every way. I was genuinely frightened and intellectually satisfied. It's a cat-and-mouse thriller for horror lovers, especially those among us who appreciate a good slasher. Herbert's a real human monster. Also, that ending—man, it uses silence and vision (or lack thereof) in such an effective way. I've been wanting to re-watch it ever since, but won't watch it at night. I don't trust the locks on my house.