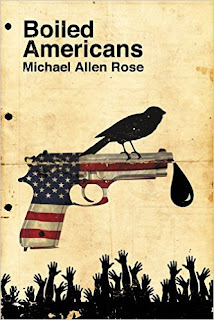 MAR: My newest book is called Boiled Americans (from Bizarro Pulp Press). It's an experimental book, pulling from a whole bunch of different forms. Meta-fiction crossed with surrealist prose, scripts, shape poetry, journalism and autobiography all wrapped up in a series of case studies based on actual shootings. It's a literary reaction to living in a major American city at a time when everything we're inundated with is steeped in violence. This, obviously, differs quite a bit from the comedy that I'm normally known for. There are definitely moments of humor in this one, but they're sandwiched between layers of all sorts of other things. The text is meant to unfold like a puzzle box. I'm hoping it'll be a real trip for people to read.

MAR: Music has always been a really important part of my creative process. With most my work, even from a decade ago or more, I could probably remember what song or artist inspired the work or helped birth it by giving me a background soundtrack. That said, because I'm such a music geek, I have to be careful that whatever I'm listening to doesn't take over my conscious attention. When that happens, I write like, a word an hour. It's sad. My musical tastes tend to veer all over the map. Industrial, metal, punk, alternative, rap and experimental top my charts, but there's some jazz, country, classical, reggae and all sorts of stuff on my "personal mix". 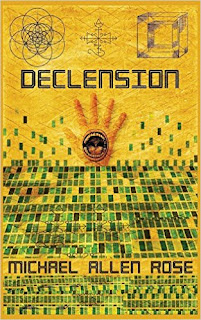 MAR: I think I might already accidentally be doing this. I eat pizza about 5 days out of 7, most weeks. Keep in mind though, I live in Chicago, which is a pizza lover's fantasy land. I like to switch it up, going from deep dish to fire baked European style to a nice malty hand tossed pie, depending on my mood. I'm a sucker for pepperoni, especially when it's spicy. Salami and other sausage type toppings will do in a pinch. Generally, I stay away from vegetables though. Ever since a green pepper stole my car, I've been wary of them. An onion also makes lewd comments at my mother on a regular basis, which I think is just rude. So give me cheese and carbs, with a little meat and some heavy herb and spice coverage, and I'm happy.

MAR: This question could go so many ways. The pervert in me would like to say "a pair of panties" but I'm a rationalist, and realize how horribly wrong that could go. I mean, think of all the people who wear panties? What if I ended up on a hairy, sweaty dude on a European fashion runway somewhere? I think I'll be safe and say: a stapler. Staplers are kind of badass. The job of a stapler is literally to shoot two metal spikes through something. That's pretty rock and roll, if you ask me. Plus, that would give me at least a decent chance of being in the creative arts. Unless of course I end up in some dull cubicle farm somewhere. I think the best answer would be, I would like to come back as a pair of panties that has been stapled to a pizza. Someone will call me "art".

MAR: If I could figure out what my ideal writing environment would be, I'd probably get a lot more writing done. I have found that the best progress happens when I'm situated in public, but not terribly noisy... a quiet, local type coffee shop maybe. I can definitely get more done at my desk at home, but there the constant threat looms large of being distracted by a handsome cat, or a cool video game, or my cat challenging me to beat his score at a video game. I can't write anything of substance in long-hand. I keep notebooks around for ideas and sketches, lines of dialogue, and short bits of ideas, but to really have something done, I need to type it out. My brain works at the speed I can type, whereas a pen and paper slow me down and get me all jumbled up. 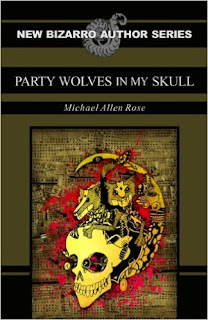 MAR: Several things occur when you die. First, you stop breathing. The electrical activity in your brain ceases. Your pulse stops and the heart no longer pumps blood through your system. There is a reduction in body temperature and the remaining blood settles into the lower portion of the body. The face becomes pale and the limbs stiffen. Soon after this, the body begins to decompose into simpler forms of matter, which often involves unpleasant smells. After that, the indefinable energy that makes us human beings, consisting of our thoughts, feelings and personal attributes beyond rational explanation, floats out of us in a tiny glowing ball of light we call the soul. This soul takes on the form of whatever animal we like best, such as a panther, or a cougar, or some other awesome jungle cat. Then, the soul cat eats anyone who is nearby at the time of decease. Once the soul cat is fed, it dons a business suit and a jaunty hat, and goes out into the world. It applies for jobs, or, depending on the economy, unemployment benefits and social services. One week from the time of death, the soul cat begins to attract a number of birds. The birds sing old Irish drinking songs, but they keep time poorly and cannot harmonize to save their lives. This is called the "Bird Discord." Once this happens, the estate of the deceased can legally be dispersed to any Vikings listed in the "Skardswill". If no Skardswill is present, the deceased's belongings should be buried at a crossroads by a licensed haberdasher no later than midnight of the second Thursday after this time has been marked by a Justice of the Peace or other certified officiant. At this point, the "ghost" which is basically the refuse left over from the soul's emergence from the corpse, is considered "debt free" and can apply for credit at most major agencies in the greater continental area.

MAR: Love. Really. Play the long game. Be nice. Don't expect anything from anyone, but be grateful and show your love to those who you love. Don't be entitled - none of us deserve anything - but be thankful when something goes your way. Make art happen.

Michael Allen Rose is a Chicago-based writer, musician and performance artist. He loves cats, tea and good beer. Sometimes he gets naked for artistic purposes. You can find his writing, music and stage presence in various places.