20Q7A: An interview with Orrin Grey

This week's guest is Orrin Grey… 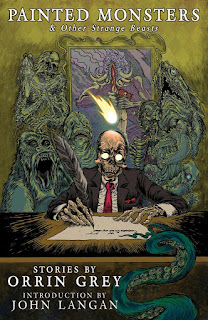 OG: Okay, yeah, I'm answering the lame self-promotional question, but seeing as how my latest book is just coming out, I feel like I owe it to my awesome publisher to at least talk about it a little bit. Painted Monsters & Other Strange Beasts is my second fiction collection, and it differs from my previous collection mainly in that--while it's also still just a collection of a lot of the stories that I wrote between when my first collection came out and now--it's got a little bit of a theme behind it.

The title comes from a quote from the 1968 Peter Bogdanovich film Targets, in which an aging Boris Karloff basically playing himself says, "My kind of horror is not horror anymore. No one's afraid of a painted monster." I thought that quote--and the movie--did a good job of summing up the changes that were happening to horror cinema at the time, and so as I put together the table of contents for Painted Monsters, I focused on stories that were inspired by horror films, and I organized them so that they gave a sort of crash course in the history of horror cinema, from the silent films of the 20s to kaiju films, Gialli, and found footage.

OG: Baron von Werewolf, though I'm sure there'd be some sort of downside that I'm not seeing...

OG: Do I lose literally every bit of my horror cred if I say Stitch from Lilo & Stitch? Honestly, I don't think there's any way in hell I could pick just one. Though they're often treated as one, monsters aren't really a genre in and of themselves. They're a trope or an element that can be used to all sorts of different ends, so there are lots of different monsters that I love for different reasons. If you put a gun to my head and made me start listing, I'd probably name off The Thing, Ymir from 20 Million Miles to Earth, the graboids from Tremors, Sam from Trick 'R Treat, and those mushroom guys from Matango before you managed to pull the trigger. 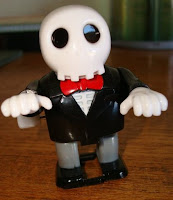 OG: I used to listen to music when I wrote all the time, and I could listen to anything. These days, though, I hardly ever have any noise going when I'm writing, and I find most music too distracting. I have no idea why the change happened. On the rare occasion that I do listen to music when I write now, it's gotta be something mostly instrumental or in another language, and movie soundtracks are the most likely suspects. I'm pretty sure it's just gonna be John Carpenter's Lost Themes album for a good long while.

OG: Man, we picked a bad 3 months for this. If we'd done it just a little bit earlier, I could at least have debased myself further by admitting that it was probably Insidious: Chapter 3. As it is, it's tough to say. Ant-Man wasn't bad, but it certainly wasn't up to the standard that the better Marvel movies have set. I recently caught some really interesting 60s/70s fare for the first time, including Salem's Lot, Spider Baby, and Let's Scare Jessica to Death. And there was an unexpected gem on Netflix in the form of this weird 2013 Korean film called Hide and Seek. It kind of lags in the third act, but near the beginning, when it isn't sure yet if it's going to be a home invasion flick or a revenge thriller or something else entirely, it's pretty great.

OG: Either ramen or fried rice. No question. And you didn't ask about beverages, but that'd be Wild Cherry Pepsi. It is, in the words of Dr. Pretorius, my only weakness. 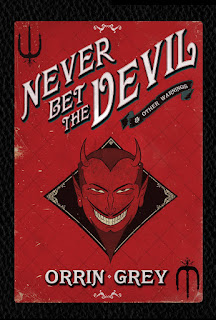 OG: Well, Hellboy, obviously. Mike Mignola has this story that he always tells in interviews about how reading Dracula when he was a kid made him realize that all he wanted to do was tell stories about monsters. I had the same realization, but for me it was reading Mignola's work on Hellboy that drove it home. He's my biggest influence, and I've been a devotee of everything he's ever done since.

Next up would be anything at all by Junji Ito. If I've got to pick a title, I'll do what anyone else would do and pick Uzumaki, but really, I love pretty much everything he's ever done, and a lot of my favorites are short pieces scattered around in various places, some of them only available in fan-made translations, more's the pity.

Third would be any Jack Kirby monster comic. I love those things to death. Again, if I have to pick a title, let's go with his run on The Demon, but a lot of my favorites are those weird stand-alone monster comics that got reprinted under titles like Where Monsters Dwell and Creatures on the Loose. Monsters with names like Googam, Rommbu, Giganto, and perhaps my personal favorite, Orrgo.

I could list comics all day, though, so here are just a few others: Beasts of Burden, Alan Moore's run on Swamp Thing, Courtney Crumrin, Dylan Dog, and Gary Gianni's MonsterMen, just to get us started.

Orrin Grey is a skeleton who likes monsters, as well as a writer, editor, and amateur film scholar who was born on the night before Halloween. His stories of ghosts, monsters, and sometimes the ghosts of monsters have appeared in dozens of anthologies, including Ellen Datlow's Best Horror of the Year, and his latest collection is Painted Monsters & Other Strange Beasts, coming in October from Word Horde.