20Q7A: An interview with Garrett Cook

This week's guest is Garrett Cook… 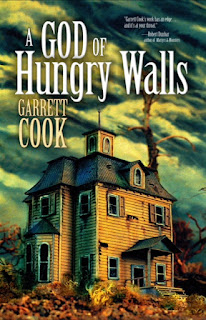 GC: My latest book is A God of Hungry Walls from Deadite Press. It differs from my previous work because my Bizarro input was various flavors of balls to the wall experimental pulp but this is more literary extreme horror. That’s not to say it’s not strange, that’s not to say it doesn’t have pulp roots but it’s very different. It’s a haunted house story told from the perspective of the haunting as it takes apart and corrupts the inhabitants of the house.

GC: Like Gary Oldman does in that scene in Bram Stoker’s Dracula when he’s walking through Piccadilly Circus with Mina. Top hat, tiny Victorian sunglasses, blood red vest.  Such a great outfit.

GC: My favorite will always be Godzilla. Godzilla in a weird way represents not just destruction but a certain amount of sense in the world. Godzilla is a natural moral order. He punishes and protects mankind. There’s something comforting about that.

GC: I would have to say buffalo chicken calzones. 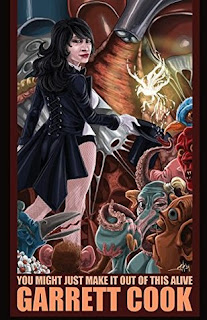 GC: Clowns. I used to be terrified of clowns. But then I saw one of the most beautiful women I know in clown makeup and I realized I’m also attracted to clowns, which is even scarier. I’m as afraid of falling in love as I am of dying.

GC: In a perfect world, a 22 year old masochist would get filthy rich.

GC: The kind of fear that makes you fight for shit.

Garrett Cook is an author, editor and singer/songwriter residing in Portland, OR. His latest book is A God of Hungry Walls from Deadite Press. If you would like to know about writing workshops he teaches or contacting him for editorial services go to http://www.garrettcookeditor.wordpress.com