20Q7A: An interview with Tom Lucas

This week's guest is Tom Lucas...

TL: According to my mom, there was a time when I wanted to be called Lance Crockett. It’s a combo of my favorite baseball player at the time (Lance Parrish) and Davy Crockett. Lance Crockett. What a name. That’s a guy who will rip your arms right out of your socket ‘cause you looked at him sideways. I should have stuck with it. 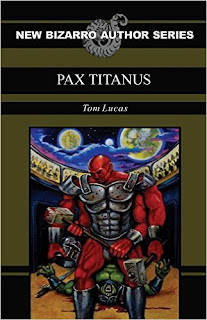 TL: I would like to go around town dressed like an old school Rollerball player. The 1970s version, not that bullshit remake nonsense. I would have to re-learn how to roller skate. It’s been a long time.

TL: Splice. I bet no one ever picks that one. Why? Did you see it? The ending? HOLY SHIT.

This question seems like a good one to answer considering…my favorite and best Halloween costume was a Tusken Raider from Star Wars. This costume was the real deal. My grandfather was a handy guy and he took an old football helmet and covered it with burlap and built in the breather and the whole shebang. That costume was so badass that I wore it three years in a row.

TL: Pizza. It is the greatest of all foods and there’s plenty of variety with all the crazy toppings available to today’s discerning pizza customer.

TL: Back in college (the olden days 'cause I am olden), I spent the summer semester in Krakow, Poland. It was 1990 and the Berlin Wall had just gone down. It was a wild, wild time. I toured a good chuck of Eastern Europe that summer as well, so that was cool.

I would love to make it down to Australia. Everything I see looks cool as hell and I really want to hang out with Adrian Shotbolt.

TL: George Carlin used to say that you get back everything you ever lost. I hope that’s not true. I have no use for 1257 ball point pens. But, on the flip side…I did lose a comic book collection when a tornado hit my house in 1997. Thousands of books right up in the air, gone forever. Sigh. Yeah, I hope I get those back.

Tom Lucas was born and raised in Detroit, and although currently enjoying the lack of snow and ice in Florida, remains a son of the post-industrial apocalypse.

He is the author of the bizarro books Leather to the Corinthians and Pax Titanus.