20Q7A: An interview with Alex Smith

This week's guest is Alex Smith. 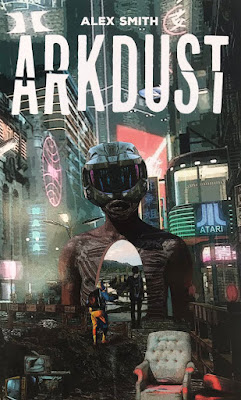 AS: My book is called ARKDUST. It's my only book! It's a collection of short stories that have appeared in zine format as well as on my old tumblr blog where I wrote and posted superhero stories. I decided to collect the best of those, tidy them up a bit, and booki-fy em. I also included two new stories. The stories are weird, wild science fiction stories with cyberpunk and superhero elements told from an Afrofuturist perspective. They feature Black and POC queer characters in lead roles doing heroic, dumb, weird, noisy things.

AS: Yeah, I have often referred to myself as a jack of all trades, master of one (1), which the one being writing (I am gonna assume - I think I'm pretty dam good at it!) I sing for a band called Solarized (solarized.bandcamp.com) and play keys in a post-punk,noise-pop band called Rainbow Crimes (rainbowcrimes.bandcamp.com). I also DJ, curate music/art/literary events, draw, act (I have an IMDb page!) and dabble in fashion. Right now, a big passion of mine is collage art; as a zine and flyer maker I've sort of fallen into collage as a medium of expression and I've been doing it more and more, even getting commissions and displaying my art on walls in public. I kinda wish I could stick to one discipline, perhaps I'd have "made it" by now if I had hyper-concentrated. But I enjoy so many different artistic mediums so I've grown to accept the parts of me that are always discovering new ways of expression.

AS: For the longest time I listened to Godspeed You Black Emperor! to write to, which I found out recently isn't that unique a thing! Much of ARKDUST was written to the Chromatics album Kill for Love because of its cinematic qualities and retrofuturist feel. Lately I find I need more soundscapes than actual songs, like I'll listen to selected stuff from William Basinski or Abul Mogard or Space Afrika. And film soundtracks that are sparse and cinematic like Annihilation, The Signal, Moonlight, Tron: Legacy and both Blade Runners. I have integrated all of these things into my everyday listening habits as well, so I'll just be bopping along up and down the streets or at home chilling playing this kinda stuff right alongside Moor Mother, Cardi B, Public Enemy, Soul Glo, etc. Also a healthy dose of synthwave bands like Midnight, Le Cassette, Timecop1983, Kristine or afrofuturist beatmakers like John Morrison, HPrizm, DJ.Fresh, Actress, Fhloston Paradigm, Joker. It all makes me feel like I'm in an 80's cyberpunk movie as I move through the Philadelphia streets. 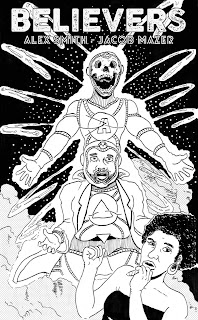 AS: Probably ghosts because of their unpredictability. It seems like poltergeists are almost always angry when they come back (or never leave?) and they're just disembodied energy that wasn't "solved" or whatever when it was on our plane of existence. Chill out ghosts! Ya'll scary as fuck!

AS: This is a really tough question, there are a quite a few comics I love and all for different reasons. Hmm... I'm gonna say, the Grant Morrison run on Doom Patrol, including his Flex Mentallo mini-series (since Flex debuted in Doom Patrol, making it a spin off), which was/is essential to my own growth as a writer. I'm going to say Keith Giffen's Legion of Super-Heroes story known as the 5 Year Gap, which also had a profound impact on me, the concepts introduced in this book concepts introduced in this book continue to blow me away, even to this day. It also introduced me to the Legion of Super-Heroes, my favorite team of supers. This last one will be really hard to pick because no matter what I say, I'm going to wake up in the middle of the night and think, "shit, I shoulda said this one!" So I'm gonna talk about one specific comic book: Uncanny X-Men #255. I read it as a kid and was mortified. It featured cyborgs killing the mutants, and kind of shocked me into the reality that every time superheroes go into battle, they do so with real stakes at hand. There's a summary of it here, which doesn't do it justice to the terror I felt as a young'un reading this for the first time.

AS: Hmm, probably a really nice handpoured or french pressed decaf from the 3rd or 4th best coffee shop in any of the major cities and it would be with Bouncing Boy from the Legion of Super-Heroes. I would spend the entire time staring into his beautiful doey eyes. He reminds me of my partner Shane!

AS: Fight bad guys, kiss some beards, cartoons tell you everything, do karate, meditate, drink the sickest coffee, smash your head on the punk rock, all cops are bad, black lives matter, and silence = death. 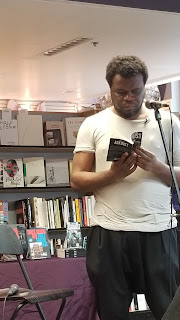 Alex Smith lives in the seams in the cloth of existence where he desperately stitches together universes with one hand and with the other, armed with an espresso tamp, makes valiant attempts to keep his lights on.

A member of the sci-fi artist/activist collective Metropolarity, founder of the queer sci-fi reading series Laser Life, and curator of the retro-futurist electro mash-up art-jam Chrome City, Alex's stories and writings embolden the weird, strange, and revolutionary dichotomy of being Black and queer in a world that marginalizes both.

Selected by Rosarium Publishing for Stories for Chip an anthology dedicated to the writing of Samuel Delany, and for Black Quantum Futurism's Space-Time Collapse: From the Congo to the Carolinas, it's Smith’s flash fiction collection Gang Stalk Oprah, self-published sci-fi zine A R K D U S T and super-hero space opera comic book BELIEVERS that will kidnap you, convert you, shoot you in the leg and then set you free.
Posted by Scott at 5/22/2019 07:00:00 PM
Email ThisBlogThis!Share to TwitterShare to FacebookShare to Pinterest
Labels: 20Q7A, Alex Smith, interview, sci-fi
Newer Post Older Post Home