20Q7A: An interview with Laura Mauro

This week's guest is Laura Mauro. 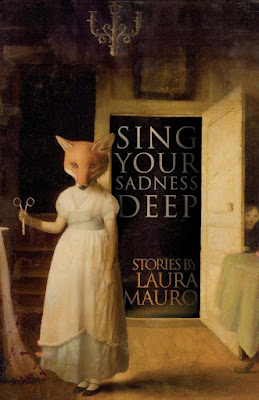 I try my hand at all kinds of crafts, though I’m not especially good at any of them. I knit sometimes, I paint, I doodle. I make sock plushies, mostly for fun, but sometimes as gifts. My husband is a guitarist, so I sing here and there. I’m fairly comfortable with the fact that I’ll never be a brilliant artist or craftsperson so it’s usually a low-pressure way to let off creative steam. And sometimes, when the stars are aligned, you might just catch me at karaoke…

I was originally supposed to have been named Nancey. Right up until the day I was born, I was Nancey. But then I was actually born, and according to my mum I did not look like a Nancey, which is hardly surprising as I was born resembling a ginger raisin, and ginger raisins are probably very difficult to name. I ended up nameless for a few days until my parents somehow settled on Laura. But to be honest, I think I would have made a perfectly good Nancey.

I don’t generally dress up for Halloween (it’s not a big thing in the UK, sadly) but I do cosplay at conventions, because I’m a massive nerd. I think my favourite cosplay was a Little Sister from the videogame Bioshock. It involved creating a prop (a kind of giant syringe) from the handle of a vintage petrol pump, a glass jar filled with red gel, and an LED light, and a length of wooden dowel, all spray-painted to look old and rusted. The costume part was relatively simple in comparison – although the bright yellow contact lenses took some getting used to. More recently, I went as Goro Majima from the Yakuza series, which involved elaborate tattoo transfers. It’s good fun. 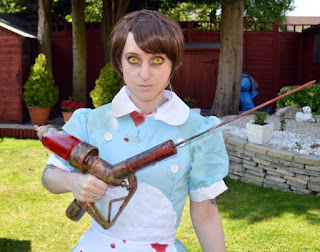 A ghost can’t hurt you because it’s not made of matter, so once you get past the initial spookiness you can safely ignore it. Or you could try and make friends with it, because it’s probably quite lonely and as the late, great Bob Ross teaches us, everyone needs a friend. I don’t think it’s fair to be scared of aliens until they’re able to account for themselves – they could be really nice and chill and just want to see all the weird and wild stuff our planet does, and all the probey abduction stuff might just be a big cultural misunderstanding. Frankly, they can’t be any worse than your average Brit abroad. Clowns, though. Clowns are gits. Clowns need to be put in concrete shoes and dropped into the Mariana trench, no exceptions. They are an affront to life itself.

I’ve been immensely privileged in the last fifteen years or so to have seen some amazing places. I’ve visited a fair bit of Europe – Italy, Germany, Finland, the Netherlands, Ireland, the Czech Republic, Iceland, Poland, Spain, Malta, Cyprus – but there are still so many places I’d love to see. Norway, Estonia, Slovenia and Bosnia are high on my list. Outside of Europe, I’ve been to the US (Hawaii and Portland), Sri Lanka and Japan. Again, there are so many places I want to go to, but if I had to narrow it down, I’d say Vietnam, Canada, China, Greenland and Myanmar. But you could give me a ticket to pretty much anywhere in the world and I’d gladly go!

Too-Ticky, from Moominland Midwinter by Tove Jansson. We’d drink hot blueberry juice by the stove in the Moomin bathing hut, and we’d look out over the frozen sea and black winter sky at the northern lights, and she’d teach me how to be brave in a scary world, and how to embrace uncertainty. Too-Ticky is one of the wisest and most comforting characters in fiction.

I spent eight years working in medical laboratories and outpatient clinics, and I have truly seen some sights. The most bizarre and fascinating thing I ever saw was a teratoma. It’s a type of tumour which originates in the cells that produce sperm or eggs. They’re masses of tumorous tissue which often contain hair, but may also contain teeth, bone, internal organs or even eyes. The cells they contain generally vary depending on the part of the body the teratoma is developing in; the cells replicate as though they were forming a part of the human body. So you might even find a teratoma which has limbs, or fingers. They are seriously spooky things. 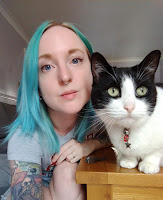 Laura Mauro was born and raised in London and now lives in Essex under extreme duress. Her short story 'Looking for Laika' won the British Fantasy award for Best Short Fiction in 2018, and 'Sun Dogs' was shortlisted for the Shirley Jackson award in the Novelette category. Her debut collection, Sing Your Sadness Deep is out now from Undertow Books. She likes Japanese wrestling, Finnish folklore and Russian space dogs. She blogs sporadically at lauramauro.com.
Posted by Scott at 8/21/2019 06:30:00 PM
Email ThisBlogThis!Share to TwitterShare to FacebookShare to Pinterest
Labels: 20Q7A, fantasy, horror, interview, Laura Mauro
Newer Post Older Post Home