20Q7A: An interview with Matt Cardin

This week's guest is Matt Cardin. 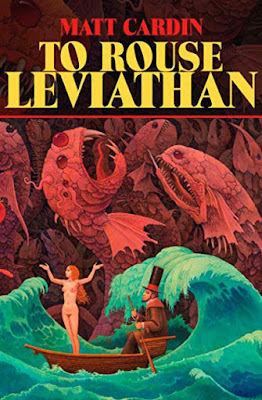 My latest book is To Rouse Leviathan, a collection of weird and cosmic horror fiction from Hippocampus Press. It differs from my first two collections because it's an omnibus that contains the complete fiction contents of the first two plus a third section bringing together several previously uncollected works. I point out that it contains the "fiction contents" of the first two because my second collection, Dark Awakenings, consisted of both fiction and nonfiction, with the stories in the first half being complemented by three academic essays in the second. The majority of my work explores the intersection between religion and supernatural horror, focusing on the intrinsic religion of horror and the intrinsic horror of religion. The relationship of these things to art and creativity also keeps cropping up. To Rouse Leviathan amounts to a complete expression of everything I've had to say about this up to now in fictional form.

I'm a pianist and keyboardist. This has been a central part of my life since I was a child, and I suppose it's linked to my writing. When I was very young, I sometimes said I wanted to grow up to be a writer. I also took to the piano like a duck to water when my mother enrolled me in lessons beginning at the age of eight. So writing and music have been intertwined creative outlets for almost as long as I can remember. I had nine years of classical piano lessons, after which I continued to play and expand my skills on my own. I also got into composing and recording with multitrack equipment. When I was in high school and college, this meant a four-track analog recorder that used standard audio cassettes. Needless to say, the audio quality wasn't very good. Sometime later I graduated to digital gear, which enabled me to really manifest the music I heard in my head for the first time. During the aughts I created an album of original instrumental music titled Daemonyx: Curse of the Daimon. Along with this, I've been a pianist at various Protestant churches, including fundamentalist, evangelical, and mainline -- Southern Baptist, Freewill Baptist, Independent Christian, United Methodist, Presbyterian, Lutheran -- for much of my life, although that's presently experiencing a lull. It has also been awhile since I composed or recorded any music.

Lately I just spend a considerable amount of time playing the piano in private as a kind of meditation. Songs I play repeatedly for this include Satie's "Gymnopédie No. 1"; the main theme from Claudio Gizzi's score for Blood for Dracula (a.k.a. Andy Warhol's Dracula), which I arranged for piano myself from the orchestral version; "The Temperature of the Air on the Bow of the Kaleetan" by Chris Zabriskie; Stephan Moccio's "Dukes"; several of Bach's two-part inventions; deeply pensive arrangements of the church hymns "It Is Well" and "Be Still My Soul" (the latter of which is actually Sibelius's tune "Finlandia"); Yann Tiersen's "Comptine d'un autre été" from the soundtrack to the film Amélie; some interludes from Mannheim Steamroller's Fresh Aire albums; Ludovico Einaudi's "Nuvole Bianche"; Liz Story's arrangement of "Greensleeves"; and a fairly enchanting piano adaptation of Davie Bowie's "Space Oddity" that I found on YouTube and learned as soon as I could. 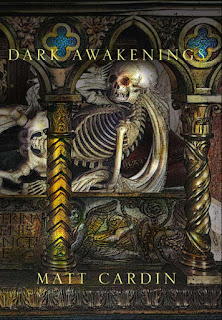 I suppose I'll have to name Frankenstein's monster. For six years I taught Ms. Shelley's classic novel to high school sophomores. For five of those years, my students and I read the entire book aloud together. I always had three sections of sophomore English, so when you combine that with the several times I've read the novel on my own, including once for a graduate English class devoted entirely to Frankenstein and its literary and historical contexts, I've read it eighteen times. Maybe that's why I've always loved seeing what filmmakers do with it. I find it odd and sad that there has never been a definitive movie adaptation. They all have something wrong with them. But I can tell you that it's a flat-out epiphany for American teenagers when you take the iconic Universal-Karloffian version of the monster, which they've had implanted and imprinted in their psyches since birth, and show them how different it is from the original monster in the book. They're also invariably fascinated when you show them other movie versions that are closer to Shelley's vision, such as Kenneth Branagh's Mary Shelley's Frankenstein with Robert De Niro's sensitive, articulate portrayal of the monster. You didn't ask, but if I had to name the single best Frankenstein movie, well, I couldn't. But if I were asked at gunpoint, I might name the Hallmark Channel's miniseries adaptation. Yes, Hallmark made a Frankenstein movie, and with Luke Goss as the monster, no less. And how ironic that this one seemed so new and almost revolutionary because it adhered more closely to the source novel than any previous version.

I tend to listen to dark ambient and classical music when I write. I find this helps to unlock my psyche. I've always responded really deeply to music, and it feels like I can access the writer's trance more easily with the help of it. It can't be music with words, though, unless they're abstract and ethereal like certain kinds of choral music, or like the mesmerizing idioglottic word shapes of a Lisa Gerrard or a Jonsi (Sigur Rós's lead singer). Other favorites for this purpose include Tim Story, Will Ackerman, Jóhann Jóhannsson, David Darling, Bill Douglas, Chris Zabriskie, Ennio Morricone, Arvo Pärt, Denise Young, Clint Mansell, Erik Satie, and the soundtrack collaborations between Nick Cave and Warren Ellis, plus various excellent YouTube mixes full of songs whose titles I'll never know. I generally choose soft music that's profoundly beautiful, melancholy, dark, and/or sinister, or sometimes all of these together. I also enjoy this same type of music when I'm not writing, but at those times it's joined by lots of other stuff. I have a serious hard rock and metal streak reaching back to my teens. Blue Öyster Cult reigns supreme, followed by, in no particular order, Queensrÿche, Rob Zombie/White Zombie, Alien Ant Farm, King Diamond (including his early Mercyful Fate days), Rage Against the Machine, Kongos, and a few more.

The original Secret Wars. Power Man and Iron Fist. And Watchmen. Sometimes these might switch places with The Hands of Shang-Chi, Master of Kung Fu, some of DC's horror comics from the 1970s (The Witching Hour, Unexpected, and so on), and others. I was an absolute comic book junkie in my teens. I collected multiple series, mostly but not exclusively Marvel, and I stored them all carefully in mylar bags after reading them. An investment for the future, you know. When I was 30 years old, my wife and I built a house, and we stored some stuff in the attic before construction was completed and we had moved in. Over the next few weeks, we were robbed three times. Someone got all my comics. 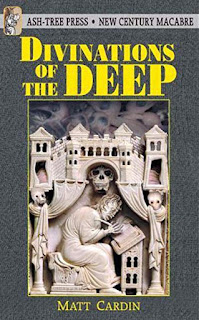 As a person who, whenever someone asks “What do you believe?”, usually identifies himself a a Buddhist Christian agnostic with Jungian, Lovecraftian, Alan Wattsian, and Robert Anton Wilsonian tendencies, I'll aver that my secret may be contained in the words of the philosopher Tripper Harrison, as manifested onscreen by the philosopher Bill Murray: "It just doesn't matter."

This very same same point was given quintessential expression in 1977 at a public lecture in front of two thousand people by one of the major philosopher-sages of the modern era, Jiddu Krishnamurti. Here's one account of what happened (and there are several): "Part way through this particular talk, Krishnamurti suddenly paused, leaned forward, and said, almost conspiratorially, 'Do you want to know what my secret is?' Almost as though we were one body we sat up, even more alert than we had been, if that was possible. I could see people all around me lean forward, their ears straining and their mouths slowly opening in hushed anticipation. Krishnamurti rarely ever talked about himself or his own process, and now he was about to give us his secret! He was in many ways a mountaintop teacher -- somewhat distant, aloof, seemingly unapproachable, unless you were part of his inner circle. Yet that’s why we came to Ojai every spring, to see if we could find out just what his secret was. We wanted to know how he managed to be so aware and enlightened, while we struggled with conflict and our numerous problems. There was a silence. Then he said in a soft, almost shy voice, 'You see, I don’t mind what happens.'"

Eckhart Tolle has also referenced the Krishnamurti anecdote, and he has offered some salient commentary on it: "If some cosmic convulsion brought about the end of our world, the Unmanifested would remain totally unaffected by this. . . . If you remain in conscious connection with the Unmanifested, you value, love, and deeply respect the manifested and every life form in it as an expression of the One Life beyond form. You also know that every form is destined to dissolve again and that ultimately nothing out here matters all that much."

I can't say that I necessarily live in or live up to such an enlightened state of consciousness, especially when I'm still consumed sometimes by the suspicion that our self-conscious existence as human beings is "malignantly useless," as Thomas Ligotti has brilliantly styled it. But my equanimity has indeed increased with age and experience. Sometimes this has not been conducive to authorial productivity. Sometimes, it has led me to fall into long periods of total silence, both inner and outer. Maybe, like Rilke suggested, my angels have also left me on those extended occasions when I've managed to get rid of my devils. I still don't know whether I should consider myself fortunate that they all keep coming back. 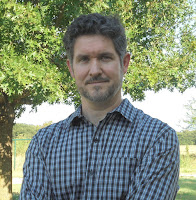 Matt Cardin is a writer, editor, musician, and college professor and administrator living in North Texas. With a Ph.D. in leadership and a master's degree in religious studies, he writes frequently about the intersection of religion, horror, art, and creativity. His books include the weird and cosmic horror fiction collections To Rouse Leviathan (2019), Dark Awakenings (2010), and Divinations of the Deep (2002) and the academic encyclopedias Horror Literature through History (2017), Ghosts, Spirits, and Psychics: The Paranormal from Alchemy to Zombies (2015), and Mummies around the World: An Encyclopedia of Mummies in Religion, History, and Popular Culture (2014). He received a World Fantasy Award nomination for editing Born to Fear: Interviews with Thomas Ligotti. He is also co-editor of the journal Vastarien. His work has been praised by Publishers Weekly, Kirkus Reviews, Library Journal, Booklist, Cemetery Dance, This Is Horror, Thomas Ligotti, Laird Barron, and more. He's online at www.mattcardin.com, The Teeming Brain (his blog), and twitter.com/_mattcardin.
Posted by Scott at 10/09/2019 06:00:00 PM
Email ThisBlogThis!Share to TwitterShare to FacebookShare to Pinterest
Labels: 20Q7A, horror, interview, weird
Newer Post Older Post Home