Well, heeeere we go! Today is the first installment of a new ongoing feature - "20 Questions, 7 Answers" - in which I interview writers of weeeeirdo fiction. Each writer receives the same 20 questions, but may only answer 7 of them.

Kicking things off is David W. Barbee, author of the recently-released The Night's Neon Fangs, among other fine bizarro word-based products. Enjoy! 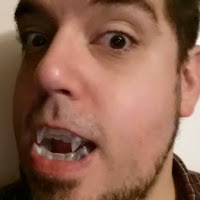 DWB: My latest is The Night’s Neon Fangs. It’s a collection of four bizarro novellas and my fourth book from Eraserhead Press. My first novel, A Town Called Suckhole, was pure distilled Barbee. My next one, Thunderpussy, was a departure into cyberpunk. Now I’m releasing four stories in one package and I feel like each one is pure Barbee again. They’re gritty and grotesque, and it’s hard to nail them down as either sci-fi or horror, which is just how I like it. Best of all they’re full of monsters. There’s a demonic police bat, an alcoholic ghost, a cyborg serial killer, and an electric werewolf. I’m at my best when I’m telling monster stories, and Night’s Neon Fangs is chock full.

DWB: This might be cheating since he’s also a comic book character, but… Swamp Thing. He’s weird, he’s slimy, he loves the environment, he dates Adrienne Barbeau, and in the sequel he fights a lamprey monster. That just rules.

DWB: When I was in elementary school I dressed as a Ninja Turtle like three years in a row, but one of those years was truly epic. My dad crafted a shell out of cardboard and glue, using old couch padding for the interior. It could be strapped to my torso like a real turtle shell, and I complimented it with a sweatshirt and sweatpants that were dyed green, along with some store-bought Ninja Turtle costume gear. I couldn’t sit down in my school desk, but damn did I look amazing.

DWB: That’s a hard question, because I love comics to death. First, I have to list Garth Ennis’ Preacher, because I love that book so much that I always mention it when someone asks about great comics. Second is the ongoing Saga by Brian K. Vaughn and Fiona Staples (everyone these days is hyping that book… and they’re right). Third, for a deep cut, is Ghost Rider 2099, because many of those 2099 titles were really cool, and a cyberpunk robot Ghost Rider is a huge testimony to that. 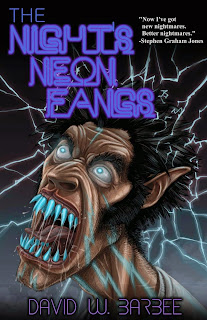 DWB: Half the time I write at my workplace, which is a library. You’d think this would be a good place to write but too often I’m yanked out of the zone because of employee duties. If it’s quiet I can get some writing done there, but often there’s an old lady giving a kindly rant or a student who’s looked all over but just can’t find the print button. The other half of my writing is done at home on my laptop, usually late at night with a movie or some cartoons on the TV. So one environment is fluorescent-bright with mildly annoying people wandering through my attention span and the other is a shadowy man cave.

DWB: I’d meet Dr. Henry Jekyll and we’d drink his Hyde serum together. Then we’d have a few laughs.

David W. Barbee is the author of four books from Eraserhead Press, the most recent of which is The Night's Neon Fangs, a collection of four bizarro novellas. He grew up on an abandoned college campus and now lives next to one of the nation's most polluting power plants.