20Q7A: An interview with Matt Serafini

This week's guest is Matt Serafini. 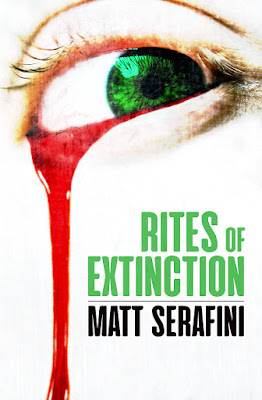 MS: My latest book is RITES OF EXTINCTION (out now through Grindhouse Press). I think it's my most experimental narrative to date. I wanted to write a book where all you get are broad strokes. For example, there's plenty of allusions to the main character's past, certainly enough to give you a sense of who she is, but everything is kept purposefully vague. I wanted to strip away all the usual digressions and push the story forward like a rocket. Just to see if I could do it. In a certain sense, it was a very liberating process, discovering that I could.

MS: Just like Don Johnson in Miami Vice. 24/7. I wear linen clothes from time-to-time, especially during the summer, and irony is the furthest thing from my mind. I'm obsessed with the aesthetics of that fashion and have always been. What's the quote from Return of the Living Dead? "You think this is a fucking costume? This is a way of life." I guess it's probably because I'd like to one day retire to the Miami shoreline, where the sun is hot and the drinks are cold.

MS: I always listen to music when I write. When I started finding my process, I wrote almost exclusively to film soundtracks: John Carpenter, Goblin, Hans Zimmer (specifically his Broken Arrow score) etc. Anything that helped me conjure the right words and put them on the page. Over the last eight years, I've started to listen to a lot of synthwave, both during the writing process as well as in my free time. I love the mood it evokes. It taps right into my creativity and gets me dreaming in the best of ways. One of my completed-but-as-of-yet-unpublished novels is directly inspired by this stuff.

MS: A couple years back, I was "Bobbi" from DRESSED TO KILL. I went all out and bought the leather coat, an accurate wig, glasses, shoes... Only thing I couldn't find was the razor blade. I had to grab a huge rubbery prop razor, but that's okay. What really surprised me about my costume was how many non-genre people got it. A nice reminder that older film culture still resonates with people, even if they're not constantly talking about it. 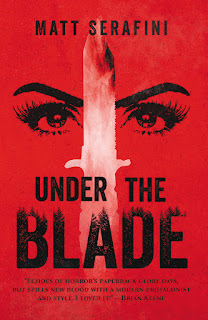 MS: Right now it's a tie between Craig Zahler's DRAGGED ACROSS CONCRETE and David Robert Mitchell's UNDER THE SILVER LAKE. Both of these movies are sprawling, but both feel incredibly personal and character driven. Both will probably be high on my list at the end of the year.

MS: I write at home, mostly. I have a corner desk and loud music to blot out the rest of the world. I haven't written anything longhand in a while, but it's an exercise I'm willing to try. Anecdotally, some writers have told me that writing your first draft by hand helps solidly the story. Helps connect you to the material more directly. I think there's also a few research studies done that have drawn the same conclusion. My process is always evolving, so I'm not opposed to trying something new.

MS: Definitely Sonny Crockett. I'd love to pick his brain. The job. The women. The drinks. Elvis the alligator! Those cars! He's got a million stories that I'd probably use for inspiration in my fiction. What would I drink? Well, I'll take that cue from the 2006 version of Crockett (played by Colin Farrell) and drink a couple of mojitos. 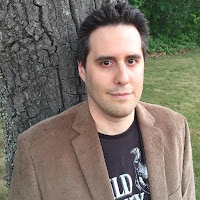 Hailed as “one of the best new voices in horror fiction” by Brian Keene, Matt Serafini’s books include Rites of Extinction, Feral, Devil’s Row, Island Red, and Under the Blade, which FilmThrills called “one of the best slasher films you’ll ever read.”

He co-authored a collection of short stories with Adam Cesare called All-Night Terror and his short fiction has appeared in numerous anthology collections, including Dead Bait 4, Clickers Forever: A Tribute to J.F. Gonzalez, and Welcome to the Show.

He has written extensively on the subjects of film and literature for numerous websites including Dread Central and Shock Till You Drop. His nonfiction has also appeared in the pages of Fangoria and HorrorHound.