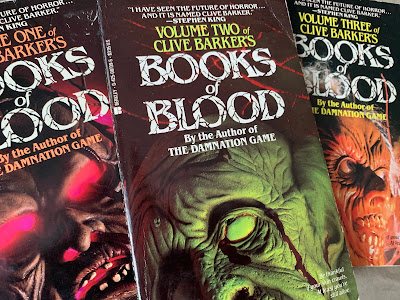 It was that now-famous Stephen King blurb on this edition of Books of Blood Volume 2 which led me to Clive Barker. Well, that’s not entirely true. It was actually that creepy green mask first. And the title second. The blurb was third.

I was 12, I think. Maybe 13. Somehow, I convinced my grandmother to buy it for me. I would track down Volume 3 soon after, and get my mom to purchase it. I think she was hesitant at first, but I leveraged the fact that “Grandma bought me Volume 2”. Or maybe she just thought reading would be better for me than watching any of the blood-drenched movies I had become a fan of. The first in the series took me longer to locate, but eventually I found it during a trip to the mall (it was the late '80s in New Jersey). I read them all, mainly in the car on family road trips.

I picked up The Inhuman Condition and In The Flesh next, then The Damnation Game, and later, Cabal and all the rest. I stared endlessly at the art on the covers, and devoured the words inside. 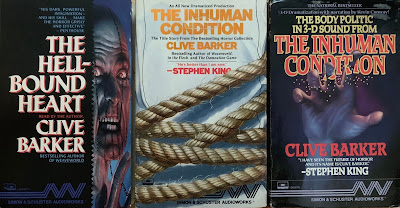 I learned of Hellraiser in the pages of Fangoria, and rented it as soon as it was available on VHS. It immediately became my favorite movie. Then I listened to the audiobook of The Hellbound Heart (on cassette), read by Barker himself. I found the fully dramatized audio editions of his stories The Inhuman Condition and The Body Politic next. I was already a fan of old radio dramas, so these were pretty exciting, and I hoped they would continue adapting his stories in that medium.

I wrote Barker a fan letter (the only person I ever did that for), asking for writing advice, never really thinking I would ever truly be much of a writer myself (I had dabbled in a few short stories at the time)—but what else do you ask writers about when you’re a kid? Months later, to my delight, he answered with a typewritten letter, signed by hand at the bottom. (Joke’s on me now - I guess I followed his advice and kept at the writing thing.) 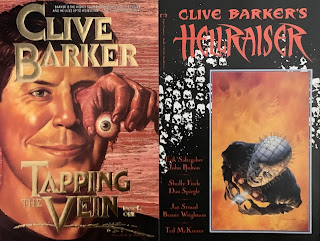 I visited comic shops to pick up issues of Tapping The Vein and the Hellraiser anthology series. An artist myself, I was over the moon when I found out about his art book, Clive Barker, Illustrator (and its eventual sequel). I spent hours poring over the drawings and paintings inside, and emulated them in some of my own work.

In reading interviews, and in the book Pandemonium, I discovered Barker’s history in theater. I quickly became obsessed with tracking down scripts for the plays he had written. I wondered if anyone had filmed any of the productions, and if so, how I could get copies.

Occasionally I would hear about readings and signings that he had done in bookstores—but always, sadly, after the fact. I would occasionally see pictures in magazines (like Fango, I assume) of the crowds, of him signing books for attendees. 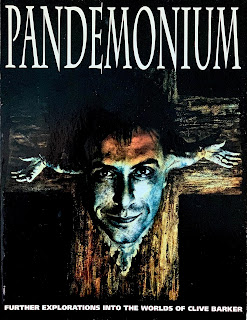 Some friends and I went to see Nightbreed the Friday it came out. I may have been the only one of us who liked it. Later on, I found a VHS tape of Barker’s early short films, Salome and The Forbidden. I tape-traded for (at the time) rare interviews and TV appearances. I bought the Dread and Lost Souls fanzines via mail order. I dragged my freshman year college roommates to see Candyman, then scrawled “Sweets to the Sweet” on the bathroom mirror in the middle of the night, hoping to be woken in the morning by a scream.

That Christmas, my parents gave me a copy of The Thief of Always, and to our surprise, it turned out to be a signed copy. I was thrilled, but also wondered: Had Barker done a signing in my hometown that I had somehow missed?

A few years later I got to see a bunch of his drawings on display. But it was another reminder that I always seemed to miss the chance to meet him or catch a reading. I had all these artifacts, at least—stories, images, a couple autographs. 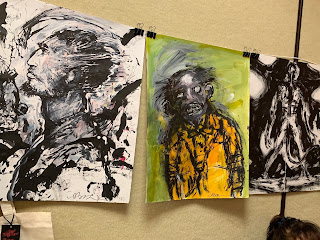 Then, many years after that, in 2012, Barker was booked for a Monster Mania convention in Cherry Hill, NJ. By this time I had moved around a bunch, but had eventually circled back to the area, and was now living in Philadelphia, across the river from New Jersey. I was making art, and working as a graphic designer. And I had resumed writing after a bit of a hiatus, and had a handful of stories in print.

I was excited. I would finally get to meet the man who inspired so much in my own work. And on top of that, there would be a screening of the “Cabal cut” of Nightbreed, which added another layer of anticipation. I bought my ticket and anxiously awaited the weekend of the show. But then, unfortunately, Barker had to cancel at the last minute, due to health issues. I was of course saddened by this for multiple reasons, and was also forced to realize that meeting him was simply never going to happen. I accepted it and moved on. 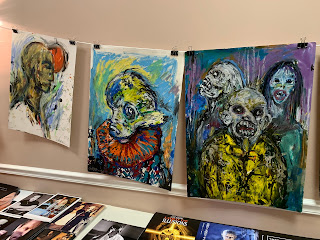 Flash forward 7 more years. Suddenly Barker was scheduled for another Monster Mania. I couldn't believe it. A sense of giddiness bubbled within me. Would I actually get to meet him this time?

My buddy Adam and I made plans to go. We got our tickets. We got in line. A very long line. I wondered what might possibly go wrong this time around.

Thankfully, nothing did. After standing in line for two and a half hours, most of it outside in the sun, we entered the room and spotted Clive Barker seated behind a table, smiling, shaking hands and signing autographs for fans. His artwork hung about the room, old and new copies of his books were piled high. 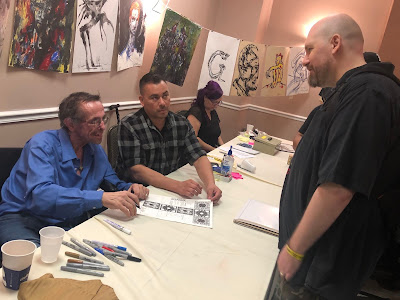 And a few minutes later, the moment arrived. I finally met the man whose work meant so much to me as a kid, and as a young adult. And still today. Adam and I both spoke to him for several minutes. He was absolutely delightful, full of all the enthusiasm I had expected from all the interviews I had seen over the years. I brought with me a Hellraiser comic book promotional print, featuring the design of the Lament Configuration, to have him sign, which he happily did. I told him how important his work was to me, and he seemed pleased. He even did a sketch for me. Later that day, I got to see him again, when he crashed the "Hellraiser Reunion" panel. 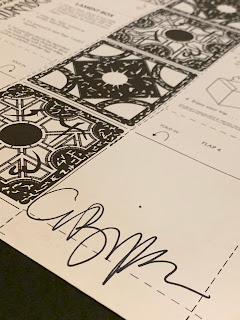 Clive Barker was my first real horror hero. Sure, I found King first, but Barker’s work was different. There was something special about it, something extra that spoke to me in a unique way. Maybe it was his wild imagination. Or maybe the fact that, in addition to being a writer, he was a visual artist like me. Or maybe it was because he worked in so many different mediums—books, movies, paintings, drawings, theater, comics, and so on. Whatever the reason, a connection was made, and fused, and I’m thankful.

Looking back on what I’ve written here, I suppose it amounts to little more than a fan appreciation post. But that’s okay. Sometimes other creators put the wind in your sails, and inspire your own artistic pursuits. A handful of them, perhaps, can fuel you for a lifetime. Clive Barker has been one of those latter individuals for me, and finally getting the chance to meet him felt like something to commemorate and place on this (digital) shelf.
Posted by Scott at 8/25/2019 05:19:00 PM
Email ThisBlogThis!Share to TwitterShare to FacebookShare to Pinterest
Labels: Clive Barker, horror
Newer Post Older Post Home