I hate Summer. If you’ve met me in person, seen the gleaming, glowing quality of my pale skin, you can understand one of the reasons why. But don’t get me wrong—it’s not just the fear of sunburn that I hate about Summer. It’s the heat, the humidity, the general lack of falling leaves and snow.

But right now it’s raining outside, which is cooling things down a little bit. And the new roof on my home seems to be holding up so far. So maybe Summer isn’t so terrible after all.

A friend asked me for some Halloween reading recommendations yesterday, and today I’m wearing a Halloween III t-shirt. So with those things in mind, plus the rain, I’m trying to pretend it’s Fall instead. It’s not really working. 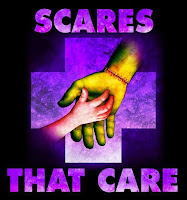 There are a few not-terrible things about Summer, however. One of them is Scares That Care Charity Weekend, which happened about two weeks ago. I was there, along with some friends, a bunch of old & new writer colleagues, and a ton of horror fanatics. It was a blast, as always (this was my fifth one, only having missed the very first event). In addition to spending three days in the vendor room meeting people, talking horror movies, and slinging books, I got to be part of the Saturday late-night Bizarro Power Hour, alongside Andersen Prunty, John Wayne Communale, David W. Barbee, Eric Hendrixson, and Stephen Kozeniewski. I read my story “Slices of Me” (for only the second time in public), and was again tickled by some of the uncomfortable sounds coming from members of the audience.

Scares, each year, is such great fun - but as the name implies, there’s a bigger purpose behind it all. Click here to read more about the organization behind the convention, and to donate whatever you can.

Anyway, it seems the sun is starting to creep out again from behind the clouds, so I’m going back into hiding, back to the shadows. I’ll keep telling myself that soon August will turn to September, and September will give way to October, and then suddenly all will be right with the world once again.
Posted by Scott at 8/14/2019 02:52:00 PM
Email ThisBlogThis!Share to TwitterShare to FacebookShare to Pinterest
Labels: Anderson Prunty, bizarro, David W. Barbee, Eric Hendrixson, horror, John Wayne Comunale, Stephen Kozeniewski
Newer Post Older Post Home