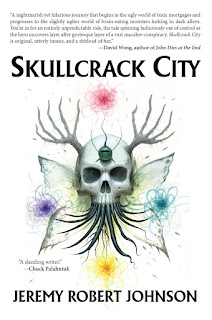 As a side note, I keep a mental list of great, real-life rich kid names. My two current favorites are Bradford Cobb and Finn Wittrock. So rich!

JRJ: The shark from JAWS. My parents let me watch JAWS for my fifth birthday. I remember jumping up and down on my parents’ waterbed (hey, we’re talking 1982 here) and hearing John Williams’ theme coming from the living room and being overjoyed. “They’re finally going to let me watch it!” Then, you know, a couple hours later my relationship with water is changed in a primordial and irrational way forever. I couldn’t close my eyes in the tub for a few years. I spend any time in the ocean in a steady panic state.

So sure, Freddy Krueger cost me a night’s sleep, and the Ju-On ghosts made me hate my attic, but that shark, man…it changed my brain.

I wish I was kidding, because it’s just beyond absurd, but I also feel like it was the most culturally beneficial costume I ever wore, because, in explaining it to drunken revelers all night, I think I introduced some folks to Maya Angelou’s work. So I got that going for me.

JRJ: UNDER THE SKIN, because it haunted me and I thought about it for weeks. It’s one of those films that hits you in an immediate, visceral way as pure cinema (that processing sequence inside the black goo!), and after that it curls up in your brain and the more you think about it the more brilliant you realize the thing was. The best portrayal of a truly alien perspective I’ve seen on film. 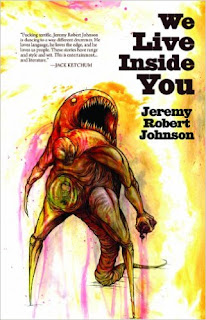 JRJ: Alan Moore’s run on SWAMP THING is majestic.  Beyond that I’d make some very 90’s selections with SANDMAN and PREACHER. I also have a soft spot for the very first black and white ALIENS run that Dark Horse published. And Jeff Lint’s THE CATERER is on my “Read Every Year Until I Die” list. It hits all the right absurdities for me.

THE INVISIBLES is next up on my list, if only to quiet all the people who keep harassing me for not having read it.

JRJ: TWILIGHT ZONE, based on the collective brilliance of the folks who wrote for it and the number of pitch perfect episodes, although OUTER LIMITS had the best version of “The Sandkings” and that is almost enough to sway me the other direction. And I’d like to give a quick shout out to the oft-forgotten FRIDAY THE 13TH: THE SERIES for giving us Cronenberg’s “Faith Healer” episode.

JRJ: I’d like to share a damn fine cup of coffee with Dale Cooper, a shot of whiskey with Al Swearengen, and a Narragansett beer with Quint. Probably in that order, preferably while riding on the back of a time-travelling owl-shark. That’s just how Maxamillion Robo-Blade gets down.

Jeremy Robert Johnson is the Wonderland Award-Winning author of cult hits SKULLCRACK CITY, WE LIVE INSIDE YOU, ANGEL DUST APOCALYPSE, and EXTINCTION JOURNALS as well as the Stoker-Nominated novel SIREN PROMISED (w/Alan M. Clark). His fiction has been acclaimed by The Washington Post and authors like Chuck Palahniuk, David Wong, and Jack Ketchum, and has appeared internationally in numerous anthologies and magazines. In 2008 he worked with The Mars Volta to tell the story behind their Grammy Winning album The Bedlam in Goliath. In 2010 he spoke about weirdness and metaphor as a survival tool at the Fractal 10 conference in Medellin, Colombia (where fellow speakers included DJ Spooky, an MIT bio-engineer, and a doctor who explained the neurological aspirations of a sponge). Jeremy is at work on a host of new books. For more information: www.jeremyrobertjohnson.com.
Posted by Scott at 9/09/2015 06:30:00 PM
Email ThisBlogThis!Share to TwitterShare to FacebookShare to Pinterest
Labels: 20Q7A, bizarro, horror, interview, Jeremy Robert Johnson, sci-fi
Newer Post Older Post Home