20Q7A: An interview with Autumn Christian

This week's guest is Autumn Christian. 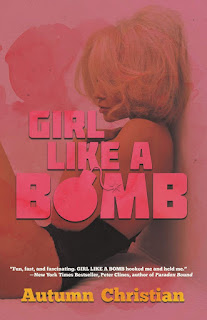 AC: My latest book is Girl Like a Bomb, out from CLASH books. All of my other books had a dark color scheme, Girl Like a Bomb is a pink cotton-candy colored book floating in a flossy heaven. It's my first non-horror book. There is about 30x more sex scenes in Girl Like a Bomb than my previous books. It has a protagonist devoid of most of my natural anxieties. Good things happen. I wrote it at a time when I was sick of being an angry baby, content with destroying virtual worlds, when I wanted to expand the mythology of my own writing.

AC: I like to cook. It's like creative math, and everything exists in reality, where actions makes sense. Then when you're finished, you have an actual product to consume.

I used to design and write for video games. I used to do a little bit of fire poi (Swinging balls of fire around basically), and I'm getting back into martial arts, although I don't know if that's considered creative. I've usually avoided doing any other creative things, because I feel like it saps my energy away from my writing. I like to channel everything into one singular purpose.

AC: I was Marla Singer from Fight Club. Everyone said I already dressed like that. 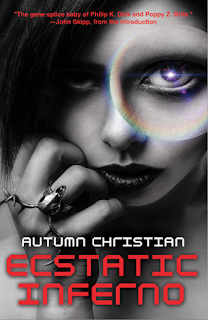 AC: Pizza. It is the perfect combination of fat, carbs, and protein and flavors designed to taste delicious. It is the food that soaks up the flavors of the world around it. It is infinite in its ingredient combinations, although in general I go for the pepperoni.

AC: A supercomputer. For obvious reasons.

AC: I actually have my own office, after many years of writing on the corner of an inflatable mattress, or in various coffee shops knocking elbows with people, or on the floor hunched over a laptop, trying not to tip over the tea balanced against my knees. I enjoy the noise of music, or the sound of rain. Sometimes I'll have a movie running on one of the monitors because there's something calming about movement in the periphery.

I write on my laptop hooked up to a secondary monitor with a mechanical keyboard. I'll occasionally go outside and write on a notebook but it is furiously slow, although often less distracting. I can feel the pulse of my brain as the words rattle around but I can't get them down fast enough, but also I don't get distracted by Twitter.

AC: That if you listen closely you can hear the salty blood inside you sloshing around, and you realize that you're about 70% water and you're basically a bunch of fluid protected by a thin layer of skin like a balloon. 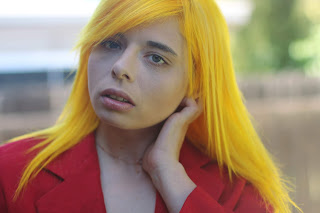 Autumn Christian is a fiction writer from Texas who currently lives in California. She is the author of the books, Girl Like a Bomb, The Crooked God Machine, We are Wormwood, and Ecstatic Inferno, and has written for several video-games, including Battle Nations and State of Decay 2. When not writing, she is usually practicing her side kicks and running with dogs, or posting strange and existential Instagram selfies.
Posted by Scott at 4/03/2019 05:40:00 PM
Email ThisBlogThis!Share to TwitterShare to FacebookShare to Pinterest
Labels: 20Q7A, Autumn Christian, bizarro, horror, interview, sci-fi
Newer Post Older Post Home