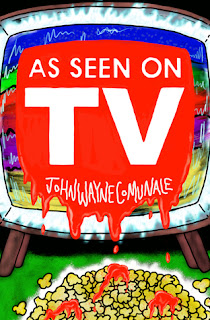 JWC: My latest book, As Seen On T.V. (Grindhouse Press), while similar in voice, is a departure from my previous work that started to show up two books ago in Death Pacts and Left-Hand Paths. My books leading up to it were very grounded in the Bizarro genre, but I've been refining the horror aspects of my writing for no reason other than it just seems to be the natural progression. While there are elements of humor here and there in As Seen On T.V. they play more as echoes of my Bizarro books. Magical Realism and the occult have become more prevalent in my latest works and help play more toward the dark, horror side of things. I'm still a Bizarro through and through, which has helped in my more horror-themed work.

JWC: I play guitar and sing in a punk rock band called johnwayneisdead, and I host my weekly story telling podcast called John Wayne Lied to You. I love to draw as well, but don't have much time to do it. I did, however, draw the cover for As Seen On T.V. 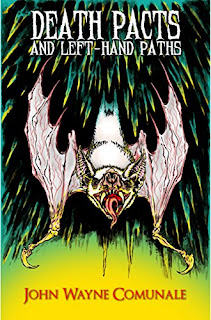 JWC: I do listen to music almost always while writing. I listen mainly to a lot of Doom and Stoner Rock from bands like Sunn, Electric Wizard, Pallbearer, Boris, etc. The growling low end, and sparse lyrics allow me to block everything else out and focus on only what I'm writing. I'll listen to other metal where the singing is a bigger part of the music, but I prefer more instrumental tracks. When I'm not writing I listen to a lot of punk, pop-punk, and other iterations of the genre like Alkaline Trio, The Lawrence Arms, The Riverboat Gamblers, The Marked Men, etc. because I like to sing along while I'm driving or just chilling at home. I still listen to heavier music as well, but it's mostly when I write.

JWC: I'm one of those weirdos who doesn't really like food for any reason other than I need it to stay alive. I never crave anything particular nor do I have any interest in trying different foods because it's just not important to me. If I could survive on only smoking weed without ever putting a morsel of food in my stomach that would be preferable. 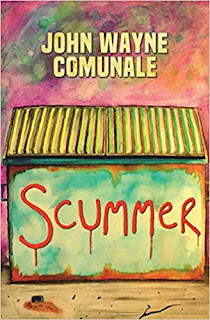 JWC: Thanks to many key experiences while on heavy doses of mushrooms I'm not really afraid of anything anymore. Fear seems to be the main thing that holds people back, and is used as a way to control. I refuse to be controlled by fear, so I just don't accept being afraid of anything. It's a very freeing mindset.

JWC: I write in a room of my house I've made into what I have lovingly dubbed The Library of Evil. The walls are painted dark red, and the baseboards and trim are black. My bookshelves and record collection reside in this room along with one of my turntables, and a black couch. The windows are covered by a pentagram flag and a Canadian flag respectfully, and atop my small table are a Ouija board and tarot cards. I'm typically listening to records like the ones I described in the question above. I usually have a pipe of weed within arms reach, and I mostly drink coffee while I'm writing. I always use my laptop for writing, and take only notes longhand in a custom notebook with a Pentagram burned into the leather on the front, and the numbers 666 on the back made lovingly for me by Earthworks Journals.

JWC: I don't remember what it was like before I was born, so I imagine it's about the same when you're dead.

John Wayne Comunale lives in Houston, Texas to prepare himself for the heat in Hell. He is the author of The Porn Star Retirement Plan, Charge Land, Aunt Poster, John Wayne Lied to You, Death Pacts and Left-Hand Paths, Scummer, As Seen On T.V. and Sinkhole. He fronts the punk rock disaster, johnwayneisdead, and travels around the country playing music and appearing at Horror Conventions to sling his books. John Wayne was an American actor who died in 1979.
Posted by Scott at 4/17/2019 07:00:00 PM
Email ThisBlogThis!Share to TwitterShare to FacebookShare to Pinterest
Labels: 20Q7A, bizarro, horror, interview, John Wayne Comunale
Newer Post Older Post Home