20Q7A: An interview with Brian Evenson

This week's guest is Brian Evenson. 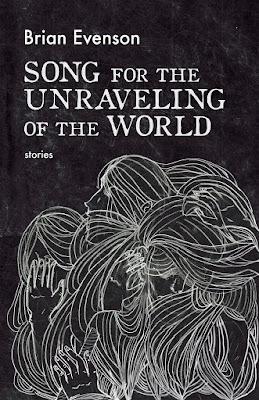 BE: I think, as any sensible person would, that I would wear strips of bacon, artfully arranged and sufficiently cooked that in case I got hungry I could eat some of my outfit. Or maybe normal clothes with a thick belt made of perfectly cooked pork belly.

BE: There's a Neo Rauch painting called "Hunt" which involves men in long green coats wearing dark green tyrolean hats and holding hockey sticks while they float though the air, with ice blocks, one frozen comrade, and a half-frozen giant worm below them. If I could figure out a way to cross that with digital artist Pierre Schmidt's "Schuld und Sühne" in which a series of athletes missing part of their legs and preparing to bowl their heads while a giant psychedically distorted head rises above them, then I'd really have something worth playing. 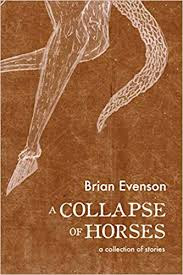 BE: My wife once made me a pumpkin costume to take our son trick or treating in, with black triangles for the eyes as well as gigantic googly eyes on top of them. As it turned out, the black triangles looked basically like a bra and the googly eyes made it look vaguely like a peekaboo bra. This was evident to every door we went to. It was my most humiliating Halloween costume but in retrospect may also have been my greatest.

BE: Ghosts. Because ghosts are the only one of those three things that are real.

BE: Twilight Zone, but just barely.

BE: As Frank Zappa says, the mind. Actually, he calls it the ugliest part, but close enough.

Brian Evenson is the author of a dozen books of fiction, most recently the story collection Song for the Unraveling of the World (Coffee House Press 2019). He has also recently published A Collapse of Horses (Coffee House Press 2016) and the novella The Warren (Tor.com 2016)--the latter was a finalist for a Shirley Jackson Award. His novel Last Days won the ALA-RUSA award for Best Horror Novel of 2009. His novel The Open Curtain (Coffee House Press) was a finalist for an Edgar Award and an International Horror Guild Award. Other books include The Wavering Knife (which won the IHG Award for best story collection), Dark Property, and Altmann's Tongue. He is the recipient of three O. Henry Prizes, an NEA Fellowship and a 2017 Guggenheim Fellowship. His work has been translated into Czech, French, Italian, German, Greek, Hungarian, Japanese, Persian, Russian, Spanish, Slovenian, Swedish, and Turkish. He lives in Los Angeles and teaches in the Critical Studies Program at CalArts.