20Q7A: An interview with John Boden

This week's guest is John Boden. 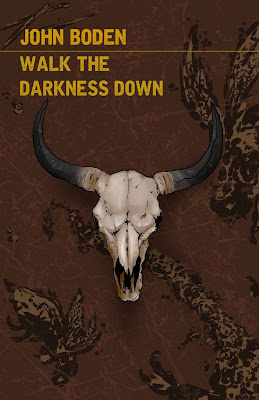 JB: Well, I have 2 out like days apart so I'm cheating. Walk The Darkness Down is my weird western from Crossroad Press. I tried to write a more traditional thing and kinda didn't. The other is Rattlesnake Kisses which is a mad crimey romp I wrote with Bob Ford. Apokrupha Press handled that. Both of these books were released in the Spring as Thunderstorm limiteds.

JB: This will shock an awful lot of folks, especially as I am sort of known as the music guy...but nope. I don't listen to much of anything while I write. I turn on the TV behind me and turn it low for background jabber and get to it.

JB: When I was maybe 9 or 10, I went as a Mummy. My mother tore up some sheets to make authentic bandages and wrapped me head to toe. My feet unraveled throughout the night and I tripped my way up and down the streets with my paper grocery bag full of sugary loot. It was my favorite not only because I love mummies and it was a great costume but because we couldn't really afford to be tearing up linens for costumes, but my Mom wanted me to be something I loved and that made it the greatest Halloween costume ever. 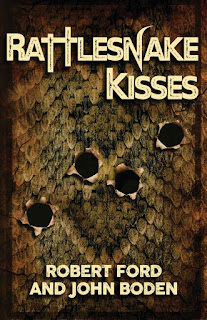 JB: Easily the 2013 Dutch film, Borgman. The wife and I watched it one Sunday evening and were blown away by the beauty and cryptic unease of the film. I have since bought it and watched it twice. It is fantastic!

JB: Haunted antique desk in corner of living room, TV on low murmur. More often than not blank Word doc screen opened and another one open where I'm fucking around on Facebook...not writing.

JB: Twilight Zone, of these two but if I had my druthers—Night Gallery. Or the short-lived 1981 series Darkroom, remember that?! 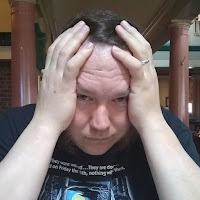 John Boden lives a stones throw from Three Mile Island with his wonderful wife and sons.

A baker by day, he spends his off time writing, working on Shock Totem or watching old westerns and terrible horror movies.

While his output as a writer is fairly sporadic, it has a bit of a reputation for being unique.
Posted by Scott at 7/17/2019 06:30:00 PM
Email ThisBlogThis!Share to TwitterShare to FacebookShare to Pinterest
Labels: 20Q7A, horror, interview, John Boden
Newer Post Older Post Home