20Q7A: An interview with Chandler Morrison

This week's guest is Chandler Morrison. 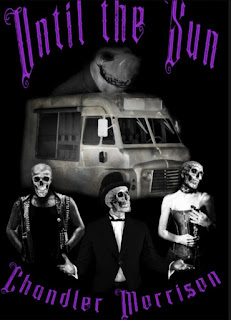 My latest book is a modern gothic novel called Until the Sun, and it’s coming out from Death’s Head Press on Halloween. It differs from my previous work in a lot of ways—I’m always trying to do something new and fresh with every book I write—but primarily it’s less “extreme” than I think people have come to expect from me. It deals with some dark subject matter, and there’s a fair amount of gore, but there’s not a lot that would be considered tremendously over the top. There’s kind of this misconception about me that I’m just some shock jock exploitation artist, but that’s really not true. If the story I’m writing calls for extreme material, I’m not sheepish about putting it in. Until the Sun really didn’t call for a ton of that, so I wasn’t going to shoehorn unnecessary nastiness into it for the sake of pigeonholing myself into a certain brand.

I’d probably have to say Never Let Me Go. I’m a huge fan of the book, so I’d put off seeing the movie for a long time because I was adamant that no one could even come close to translating the haunting beauty of Ishiguro’s prose onto the screen. I finally caved and watched it a couple of weeks ago, though, and it’s truly magnificent. The novel still reigns supreme, in my mind, but the movie adaptation really nails the tone of the book. It does an amazing job of painting this bleakly beautiful portrait of young people who are resigned to the hopeless tragedy of their existence.

From Hell, Watchmen, and Preacher. Brian Keene told me he believes Preacher to be the Great American Novel of our time, and I’m inclined to agree with him in many respects. While the theme of patriotic nationalism probably won’t resonate with younger readers of a particular sensibility, there’s a lot of things about that story that are so universal that I think a person of any generation would be able to find something to which he or she could relate.

I have this enormous writing desk that takes up a large portion of the west wall of my apartment, and I do all of my writing there. I always type as opposed to writing longhand, because that’s the only way I can keep up with the speed of my thoughts. I generally require complete silence, so it’s difficult for me to write in public. I also like to light candles (always blood-red, and no less than 4.5 inches in height; I’m very particular about my ritualistic practices), and coffee shops usually frown upon that kind of thing.

Roland Deschain of Stephen King’s The Dark Tower series, no doubt. That guy’s been through some shit, and I’m sure he could help put my own trials and tribulations into perspective. I’d have a tonic water, preferably on the rocks.

Oh, man, that’s a tough one. The human body is, I think, an incredibly disgusting organism if you really consider everything that makes us tick. Sure, from a surface level, the body can be very beautiful, but once you peel back just a single layer—or even just look at the surface under a microscope—it starts going to hell really fast. All of those biological processes, all of that skin and meat and fluid that combine into a walking, talking host for innumerable parasites and diseases…yuck. I try not to think about it. Medical stuff, especially, grosses me out to no end. If I had to choose, though, the reproductive system—both male and female—is probably the worst. If you delve into the hard science of it and start pulling out all of those technological terms, you’re left with a horror story that’s infinitely nastier than anything I could ever dream up. The miracle of birth seems a lot less miraculous when you start talking about mucus plugs and the corpus spongiosum. Add to that the cosmic irrelevance of breeding, and it’s a wonder anyone has sex at all.

My tan is fake.

Chandler Morrison is the author of Until the Sun, Dead Inside, Hate to Feel, and Just to See Hell. He lives in Los Angeles.
Posted by Scott at 10/23/2019 06:30:00 PM
Email ThisBlogThis!Share to TwitterShare to FacebookShare to Pinterest
Labels: 20Q7A, Chandler Morrison, horror, interview
Newer Post Older Post Home