20Q7A: An interview with Sam Richard

This week's guest is Sam Richard. I have two latest books that are different in a multitude of ways. The first is my short-story collection, To Wallow in Ash & Other Sorrows, which came out mid-October through NihilismRevised. It differs from my previous work in that it is my first stand-alone book. It's 9 stories, 7 of which were written in the wake of my late wife's unexpected death in 2017. These stories are my grief, shock, and utter confusion as I tried to come to terms with what happened. It's weird and transgressive horror that simply drips with grief. It absolutely marks a change in my writing as the personal aspect is much more pronounced.

The second is The New Flesh: A Literary Tribute to David Cronenberg, of which I am both the publisher (through my own Weirdpunk Books) and co-editor (along with Brendan Vidito). This is a big change in several ways. I co-edited the first two Weirdpunk Books anthologies with Emma Alice Johnson, who also ran the press at that time. The third Weirdpunk Books anthology, Zombie Punks Fuck Off, while I edited it alone, was co-published with Clash books, as I had just taken over Weirdpunk and had no idea what I was doing, haha. With The New Flesh, this is the first Weirdpunk book that I had control of from start to finish and had my hands in every aspect of publishing the book. It is also the first time I've worked on a project with co-editor Brendan Vidito, who has been a close friend for several years and I had always wanted to do a project with. And finally, this is the first Weirdpunk Books anthology that isn't punk-forward. The aim of the press when Emma was running it was very much about having the punk element front and center. For me, I'm much more concerned with the diy punk ethos being the spirit in which the press operates, as opposed to needing to be the central focus. So that's kind of a big change. Barring issues with the proof copy, The New Flesh will be out the week of Halloween.

In addition to writing, editing, and publishing, I also play guitar in 2 bands. The first is called Ash Eater and it is my excuse to be in a band with several of my close friends. We play weird, dark, heavy music that we are unable to fully classify. It's like a stew of crusty hardcore and sludge with occasional blackened vibes, grind passages, and catchy weirdo riffs. We've been playing occasional shows around Minneapolis and our demo should be out before the end of the year.

I also play in a band called Daoloth, which is black metal. This was a project that I was working on a number of years ago that got pushed to the back due to life stuff getting in the way. The drummer and I are just starting to get this up and going again with the goal of tightening up the old songs and finally getting them recorded. This is the musical project that will be the vehicle for my grief, as I've kept that aspect largely out of Ash Eater (aside from the name). As best as we can tell, this will likely remain a studio-only project.

This is one of the hardest questions I've ever been asked...

I'm a massive fan of werewolves, despite thinking they're nearly always done poorly. Something about a person reduced to nothing but primal prey-drive and fully rewilded is incredibly compelling to me, so I'm tempted to go with that, but I actually think my true answer is the Ghoulies. Small-creature horror is one of my all-time favorite genres - so much so that I'm currently shopping a novella I wrote in that vein -  and Ghoulies is probably my favorite entry. I guess that makes the actual answer simply, "demons," but Ghoulies are some kind of special demons. And, if I'm forced to get specific, Green Baby (the unofficial name of the small, bald, green Ghoulie that my friends and I use) is probably my favorite of the Ghoulies. So, I guess my answer is Green Baby. But no one would know what the fuck I was talking about if I just said my favorite movie monster was Green Baby. 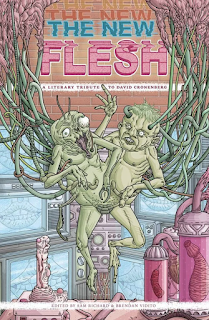 I like how this question could be interpreted generally, like "What happens to us when we die," but is actually super-specific to the interviewee. What happens when I die is the world ends. And I don't mean that to be taken as some kind of ego thing. I think this is true for all of us.

Absolutely and without question, my number 1 is The Invisibles, Grant Morrison's master-work of surreal, conspiracy-laden, radical-politics filled, occult how-to-manual, post-modern art as comic-book. There's nothing like it. Number 2 is probably Alan Moore's Swamp Thing run. Holy fuck is that comic amazing. Poetic, beautiful, haunting. It's just a cut above everything from that era. Number 3 is harder to pin down. I love shit like Charles Burns' Black Hole, Hans Rickheit's Chloe, and Daniel Clowes' Like a Velvet Glove Cast in Iron so I really want to rep some of those weirder 'indie comics', but at the same time I'm pretty sure my 3rd pick is another classic Vertigo title with Peter Milligan's Shade: the Changing Man. This is a comic that not enough people have read and y'all need to get your shit together and check it out. I can't really even put it into words. It's just incredible. I know that there's a ton of rad stuff happening in comics these days (with much of it being written and drawn by a more diverse crowd than the same old 8 white British/Scottish/Irish dudes), but I'm just not as plugged into comics as I once was, so I'm leaning on old favorites.

I tend to alternate between writing on my couch and writing at my desk. I generally need seclusion, though I can write if someone else is in the room also doing something quiet (like reading or drawing or also writing), so no coffee shop for me; though I will occasionally write at work on my lunch break. If at home, I tend to throw on music that's heavily atmospheric that has no vocals (CryoChamber mixes, The Haxan Cloak, Black Mountain Transmitter, horror scores) and I pour myself a bourbon and grab a beer. Most writing days, I sit and slowly chip away at the first hour or so, once I get past that my productivity tends to increase from there. I generally write on my laptop, though I occasionally scribble shit down on paper and then revise as I transcribe it.

One Halloween, a group of my friends and I all made masks like they wear in the original Wicker Man movie and went as a group of Summerisle people. That was a lot of fun. But I think the greatest costume I ever did was with my friend Glenn, who is the other guitar player in Ash Eater. One year, she and I each made costumes that looked like we were members of The Process Church of the Final Judgement. We had black cloaks on, like they would wear, with shirts that had the Processean symbol and the Goat of Mendez sewn onto them. I printed out these little cards that had the iconic photo of Robert de Grimston and made stamps of the Processean symbol and inked them onto the backs. We just handed them out to people at a party and tried to talk with them about joining our group. A few of our friends knew what we were, but I think it was a bit esoteric for most. Either way, I'm super proud of that one. 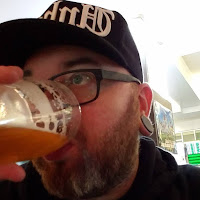 Sam Richard is the owner of Weirdpunk Books, the editor of Zombie Punks F**k Off, and the co-editor of both The New Flesh: A Literary Tribute to David Cronenberg and Hybrid Moments: A Literary Tribute to the Misfits. His writing has appeared in such varied publications as Lazermall, Strange Stories of the Sea, Breaking Bizarro, Dark Moon Digest, and many others. Recently a widower, his primary focus is on writing weird, transgressive horror with an emphasis on grief. His debut short-story collection, To Wallow in Ash & Other Sorrows came out Fall of 2019 through NihilismRevised and he slowly rots in Minneapolis, MN with his dog Nero. You can find him on Twitter and Instagram: @SammyTotep and at towallowinash.wordpress.com
Posted by Scott at 11/13/2019 06:52:00 PM
Email ThisBlogThis!Share to TwitterShare to FacebookShare to Pinterest
Labels: 20Q7A, horror, interview, Sam Richard
Newer Post Older Post Home