20Q7A: An interview with Jeff Burk

This week's guest is Jeff Burk… 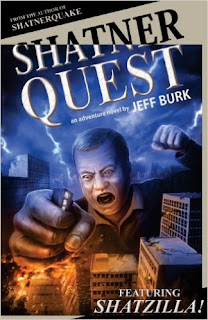 JB: I always have media of some sort playing while I write. When I listen to music it isn’t any different than what I listen to for enjoyment. I tend to listen to a lot of punk, ska, and reggae. Some of my current favorite bands include Night Gaunts, Mad Conductor, the Stupid Stupid Henchmen, Anti-Venom, Forty Ounces, and the Interrupters.

Another thing I like is to have movies playing constantly in the background. I like to pick movies that fit the theme of what I am working on. When I wrote SHATNERQUEST, which is a road-trip story, I had road trip movies on in the background like DETROIT ROCK CITY and EASY RIDER. When I wrote SUPER GIANT MONSTER TIME, my giant monster tribute, I had a constant rotation of Godzilla and Gamera flicks.

JB: My most recent favorite movie is one that has gone under almost everyone’s radar this year – SPRING by Justin Benson and Aaron Moorhead. It’s an absolutely beautiful and weird mash-up of romance and Lovecraftian tropes. What’s even more amazing is that this is Benson and Moorehead’s second film (their first is RESOLUTION on it’s on Netflix – fucking fantastic modern horror with dashes of cosmic horror). They’re at the top of my list of new horror directors to keep an eye on.

JB: Between high school and college, I was fortunate enough to travel through France, Italy, and Switzerland (and I guess Vatican City as well – it is its own country). I loved all three of them. Paris, France was my favorite portion of the trip with Venice, Italy being a close second.

I would love to see more of the world. Tokyo, Japan is at the top of my list of places I’d like to see. 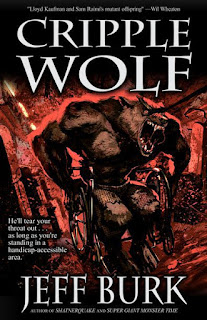 JB: I adore comic books! I’m an avid reader of everything from mainstream superhero stories to avant garde indies. I’ve written before about my favorite comics and what I recommend to new readers (http://bizarrocentral.com/2011/07/27/top-eight-comics-for-the-bizarro-reader/). So I’m going to change the question a bit to what are my three favorites currently being published:

CROSSED by various writers and artists – My absolute favorite ongoing comic out there. It’s an apocalypse/post-apocalypse comic about the world populace getting infected with a “disease” that causes people to indulge in their most sadistic violent and sexual urges. This is easily the most graphic and fucked-up comic out there – I love it! What makes it really fun is that every couple of issues, the writer and artist changes as does the story and time period, so the reader isn’t following one character or group but getting a global view of the end of the world.

HARLEY QUINN by Amanda Conner & Jimmy Palmiotti – Everyone knows who Harley is and she finally has a great ongoing series. In the current DC universe, Harley and the Joker have broken up. The comic focuses on what Harley does while she tries to define her life apart from the Joker. It’s a fun and violent technicolor ride that finally answers the question of what comic book villains do with they're not committing crimes.

SEX CRIMINALS by Matt Fraction and Chip Zdarsky – This is the ongoing that every bizarro fan needs to check out. I don’t want to give two much of the story away but it deals with a man and a woman who discover that when they have sex time literally stops - so they decide to become the world’s most awkward bank robbers. 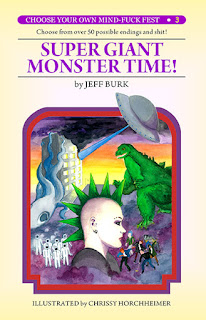 JB: I have a writing/work space that is set up in my room. I work on my laptop all the time, normally with music, movies, or podcasts playing in the background. My desk is surrounded by shelves filled with comic book and movie toys – mostly Godzilla figures and Lego superhero sets. My fat cat, Squishy, is normally snoring somewhere very close by.

For my short stories, I write the first drafts mostly by hand in a notebook I have. When I work on those, I like to go out to nearby bars and write and drink.

JB: I would want to have LSD-laced IPAs with King Mob from Grant Morrison’s THE INVISIBLES.

JB: Easy, TWILIGHT ZONE. While THE OUTER LIMITS had the great monsters, the TWILIGHT ZONE had what really matters – great stories. Some of my favorite episodes are “The Monsters are Due on Maple Street,” “Nightmare at 20,000 Feet,” and “The Midnight Sun.”

JEFF BURK is the cult favorite author of SHATNERQUAKE, SUPER GIANT MONSTER TIME, CRIPPLE WOLF, and SHATNERQUEST.  Like the literary equivalent to a cult B-Horror movie, Burk writes violent, absurd, and funny stories about punks, monsters, gore, and trash culture. Everyone normally dies at the end.

He is also the the Head Editor of ERASERHEAD PRESS’ horror imprint, DEADITE PRESS.