20Q7A: An interview with Gwendolyn Kiste

This week's guest is Gwendolyn Kiste. 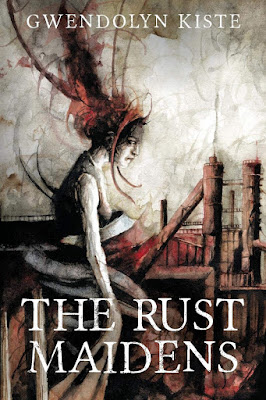 GK: My most recent book is my debut novel, The Rust Maidens. It’s all about the Rust Belt and girls transforming into grotesque yet beautiful monsters. Most of my previous work has been short fiction, so this is definitely my most ambitious project so far. It’s the longest, of course, since it’s my first novel, but it also has a more intricate story, with a back-and-forth narrative split between 1980 and 2008. Because more than half the book is set in 1980, a lot of research went into the project, more than anything else I’ve ever written. It was certainly a challenge at times, but then what fun is writing if it doesn’t utterly baffle and challenge us?

GK: Pumpkinhead immediately jumps to mind for me. I’m a huge fan of practical effects, and there are few costume monsters that are more elaborate and well-done than that one. His horrific yet wonderfully expressive face! That perpetually foggy atmosphere that surrounds him! He’s one for the ages.

Unfortunately, I do feel like the first film has a lot of flaws—and I’ve never been able to get through any of the sequels—but I still think Pumpkinhead deserves more love than he gets. He’s certainly a great folk horror monster, if nothing else.

GK: Ghosts, for sure. Clowns have never really frightened me. I don’t particularly like them, but they’ve never bothered me much either. As for extraterrestrials, I feel like we’d so handily lose against hostile aliens that there’s probably no point in being afraid. They’ll likely kill us swiftly to get us out of the way if that’s what they want. So ghosts are definitely the scariest to me. They could haunt you for the rest of your life. Since they’ll be dead for eternity, ghosts can also stand to be patient, and without a doubt, that’s what makes a formidable foe.

GK: I’m going to go big with this question and say Saturn. It was always my favorite planet when I was young. In all the photographs and illustrations, Saturn looks so fearsome. From the time I was in elementary school, I imagined that she was wearing her rings like armor. Because Jupiter is bigger and also one of the nearest planets to Saturn, I decided that Jupiter was kind of the bully of the Solar System, and that he hassled Saturn, so she grew her rings as a way to ward him off. That strange little backstory only made me love Saturn more as a kid, so it would be fun to spend some time actually being reincarnated as her. 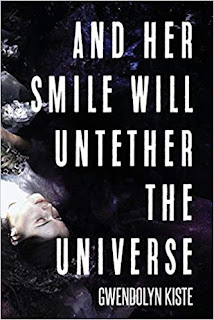 GK: My writing environment is everchanging, though one thing is a constant: there’s always coffee. And lots of it too. I spend a decent bit of my time writing in coffee shops, though I’ve been working from home more lately, just to break things up. Either way, I crave some ambient noise in the background. Complete silence is a distraction to me.

As a rule, I do write out a lot of my first draft notes by hand, which leads to grand confusion, since I can’t always read my own handwriting. It’s usually best when I just sit down at my computer and type everything out right from the start, but there’s something really great about writing a story longhand, if for no other reason than the nostalgia and romance of it. It seems like how writers should work, even if that doesn’t always turn out well for me and my sloppy penmanship.

GK: The Twilight Zone, without a doubt. I grew up absolutely loving—and being a little terrified of—the show. It introduced me to so many of my now-favorite horror tropes: doppelgangers, ghostly hitchhikers, and gremlins that are definitely not in the Mogwai tradition. I enjoy The Outer Limits as well, but I just never developed quite the same love for it. Part of what has always drawn me into The Twilight Zone is the veiled/not-so-veiled social commentary, which still resonates to this day. After all these years of watching and re-watching the series, Rod Serling practically feels like extended family to me.

GK: A mint julep with Jordan Baker from The Great Gatsby. She’s always been a character that I’ve found fascinating, even though she doesn’t seem to get much attention. When Daisy Buchanan’s right there, siphoning all the spotlight, I guess that happens. But there’s something subtly captivating about Jordan. Of course, I’m not saying that she’s necessarily the nicest of characters—nobody in that novel is very nice or admirable—but she’s still such a chameleon, willing to rebel against social convention to become an athlete at a time women rarely pursued such opportunities. Throughout the novel, she proves she’s uniquely equipped at surviving, even in hostile environments, and that alone makes her interesting. Plus, I imagine she’d be a very fun drinking partner, and really, who wouldn’t want to enjoy a night of cocktails in a Gilded Age speakeasy?

Gwendolyn Kiste is the Bram Stoker Award-nominated author of And Her Smile Will Untether the Universe, from JournalStone; the dark fantasy novella, Pretty Marys All in a Row, from Broken Eye Books; and her debut novel, The Rust Maidens, from Trepidatio Publishing. Her short fiction has appeared in Nightmare Magazine, Shimmer, Black Static, Daily Science Fiction, Interzone, LampLight, and Three-Lobed Burning Eye as well as Flame Tree Publishing's Chilling Horror Short Stories and Haunted House anthologies, among other outlets.

Originally from Ohio, she now resides on an abandoned horse farm outside of Pittsburgh with her husband, two cats, and not nearly enough ghosts. You can find her online at gwendolynkiste.com.
Posted by Scott at 5/01/2019 07:00:00 PM
Email ThisBlogThis!Share to TwitterShare to FacebookShare to Pinterest
Labels: 20Q7A, Gwendolyn Kiste, horror, interview, weird
Newer Post Older Post Home